How to manage the temperature of your conservatory.

How to manage the temperature of your conservatory.

Too hot, too cold: common issues with conservatories

Conservatories have been a popular addition to homes across the UK for many years, with an estimated 18% of all households in England now having a conservatory or glazed extension, according to a government survey carried out in 2013. They are meant to be a light, airy, enjoyable extension to a home- an area that can be used all year-round. Many homeowners bought their conservatory with the hope that it would be an extra living space in the summer, and a place where they could get some much-needed warmth, light and comfort during the cold winter months. The reality, however, is that many conservatories are not living up to their purpose, suffering instead from a whole host of issues, mostly to do with temperature. A common complaint is that they are too cold in the winter to enjoy, and overheat in the summer to the point of being unusable. This guide will look in detail at the temperature problems facing conservatories today, and what you can do to improve them.

A history of inadequate conservatory insulation

Conservatories became a popular trend for homes during the 1970’s, when aluminium-framed structures went up all over the country, swiftly followed by the eponymous UPVC buildings you are familiar with today. Their popularity was boosted by the fact that planning permission is often not required for a conservatory, making it an easy way of increasing floor space in the home. Unfortunately for many, the truth is that lots of these older extensions are no longer fit for purpose. Some older conservatories don’t even come with double-glazing, only single-glazed glass. Glazed structures by nature are not designed to last forever: even double-glazing has a shelf-life, and eventually, window seals disintegrate. Older glazed panels can then fog up, and be subject to condensation and moisture, making the space damp and unappealing. On top of this, many older double-glazed windows start to malfunction, with handles and locks being a big issue as they bend and warp over time. This allows drafts in through the edges of the window frame, and adds to the problem.

Changing weather in Britain – temperature extremes and your conservatory

There is another reason your conservatory might be feeling more and more uncomfortable to be in these days- our changing weather. 2018 saw some of both the hottest and coldest weather on record in the UK, with many attributing this to climate change. In particular, we experienced extreme temperatures, especially during the cold wave known as the ‘beast from the east’ of 2018, in which freezing air from Siberia brought record-breaking low temperatures and up to 50cm of snow in some areas of the UK. Later on in the year, Britain then experienced a prolonged heatwave, again attributed to climate change. 2019 is set to repeat the cold extremes, with predictions for a second ‘beast from the east’ already being made. Needless to say, British houses and conservatories are not really engineered to withstand varying extremes of temperature. This is something to bear in mind as we move into the future.

The problem with conservatory design- too much glass

In addition to ageing structures, inadequate components, and extremes of weather, there is one, more obvious thing to consider. Conservatories are, by nature, rooms where most of the surface area of the walls and ceiling is made up of glass. Whether double-glazed or not, modern or old, this design in itself makes conservatories prone to huge temperature variations. Large areas of glass and windows are fantastic for allowing light into the home, but also very adept at allowing valuable heat to escape, whilst acting as giant sponges for sunshine in the summer. In short, most conservatories are not actually designed to be the same temperature as the rest of your house. This results in some of the following issues:

Bringing your conservatory into the future

Thankfully, modern technology is now allowing us to regain control of the temperature of our conservatories and sunrooms. One of the fastest, most cost-effective ways to solve a conservatory that is too cold or too hot is to insulate the space properly. Roof insulation stops valuable heat escaping through the roof in the winter, and can help to regulate the temperature in blistering summers, as well as cut down on UV glare. This is done by removing the existing roof, and replacing it with layers of insulation materials including internal insulation, breathable membranes, insulated roof panels, and lightweight, heat-retaining tiles on top of everything. Conservatory roof insulation can be an extremely cost-effective way of renovating a conservatory and making it useable once again. 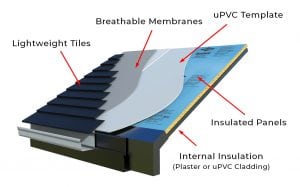 In addition, most conservatory insulation specialists will be able to colour match any new roof to the exact style and shade of the the rest of your home, turning your tired old conservatory into more of a permanent, attractive extension to your home- with the added benefit of taking a very short period of time to install. Most roofs can be retrofitted to a conservatory within a matter of days. Other methods of insulation can include replacing the doors and windows, again at less than the cost of replacing your conservatory. A range of glazing and finishing options are available for maximum style and comfort, and you can enhance the security, energy efficiency and noise reduction qualities of your conservatory. Finally, there are some additional ways of regulating the temperature in your conservatory that are quick and relatively cheap, although perhaps not as long-term a solution as effective insulation:

Would you like to understand more about solving temperature problems in your conservatory? Speak to All Seasons Roof today to learn more about their unique roofing insulation solutions.

Tweets by as_roof_uk
Get a Price
Request a Brochure